New Years Eve, and the following days, we were blessed with cold, clear weather!!

The picture above was taken on January 1st, at about 9.30 am. A beautiful New Years Day`s morning!

We celebrated the first day of the year by going out to hunt seals. With Ingkasis dog-team, we searched for breathing-holes on the sea-ice close to Ittoqqortoormiit.

When we found a hole that looked promising, Ingkasi stayed there to wait for the seal. I continued by dog-team, away from the breathing hole, to let the seal believe we had left it altogether. Ingkasi shot a seal just before it began to get dark! We invited some of our family members to eat the delicious fresh meat with us that same evening.

Two days later, Ingkasi went out in the morning to look after his seal-nets. A few hours later, I got a call from him, telling me that he had just shot a polar bear! I went out to meet him on the ice outside of town, where he began to explain what had happened.

He had found fresh tracks of the bear very close to the house of the Youth Club (“Ummimak Klubben”) where it must have passed by during night-time. Ingkasi followed the tracks until he found and shot the bear just a few kilometers away from Ittoqqortoormiit.

Arriving home, the dogs deserved a good rest! They did a great job that day.

This was the first bear hunt since last June, when the last bear of the 2014 quota was shot, and it brought lots of excitement and joy to the community. We had called Ingkasis siblings, and several of them came running towards the sledge to touch the bear when he returned to Ittoqqortoormiit. According to local tradition, the bear is divided into 5 parts. The hunter gets one of them. The first 4 people touching the bear after him also get one part each. Others just came by to help out or to wish us well.

I realize that many people outside of Greenland would like to see polar bear hunting come to an end, and some of them have commented on another post about polar bear hunting (written in 2013) on this blog to express their opinions and concerns.

I actually considered not to write about this bear and not to share any pictures of it, because I don`t like to upset other people.

After giving it some thought, I decided to share this anyway, because a successful  polar bear hunt is such an important local event. To leave it out in the context of writing about “Living and Hunting in Ittoqqortoormiit” would mean be to leave out one of the very few still existing nerves of traditional Greenlandic culture in our community.

I am currently evaluating where I want to go with this blog in the future. Maybe (and not just for the reason mentioned above) I will stop bogging about hunting altogether and create a new blog about other topics! 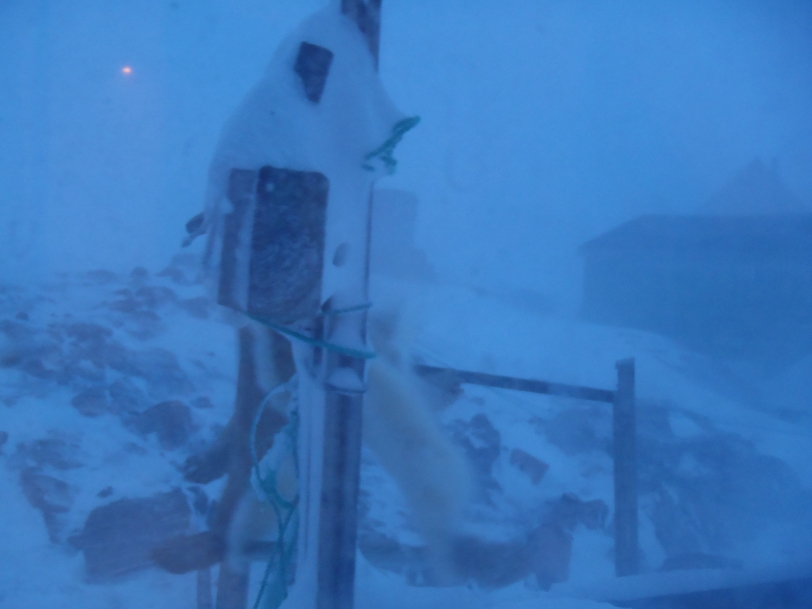 A few years into the new year, a new storm hit us, and has only calmed down for a few hours at a time, ever since!

Blizzard after blizzard has made us spend most of our days indoors. Flights to West Greenland have been cancelled (there has been a single flight from Iceland making it through). There has been no mail delivered, and no passengers have arrived from other parts of the country, since before Christmas!

In the spells between storms we have to restock our food and water supplies, feed the dogs and make sure we´ll get through the next storm without running out of fuel.

These last pictures were taken on Saturday, when the weather was quite calm in the middle of the day. We went out to get some more water, and enjoyed the fact that we for once could see the sky!

We got loads of new snow in the first half of January (note the snowdrift by the yellow house)! 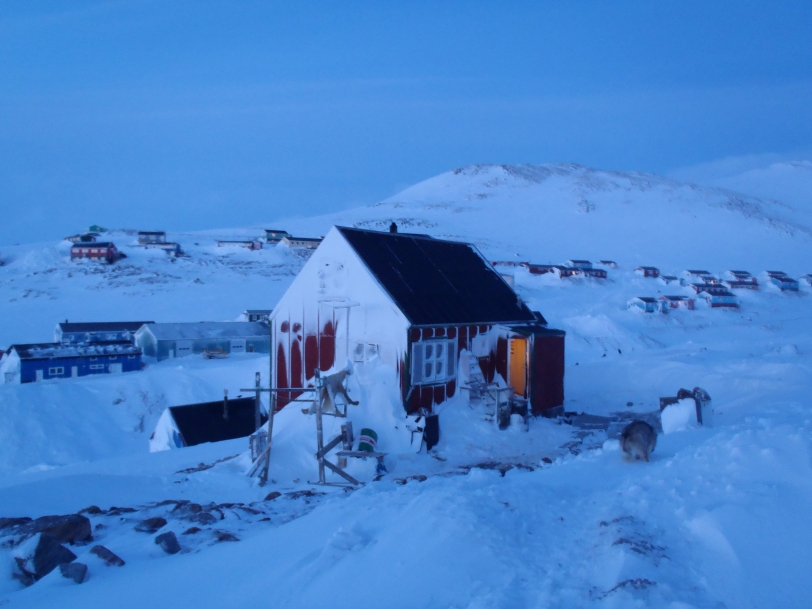 I am so thankful to have a cosy home to safely sit out the blizzards, each time they hit Ittoqqortoormiit!

As I am writing this, it is once again stormy outside, 30 m/s this evening. But – finally, the weather forecast looks good! And in just a few days, we should be able to see the sun again 🙂 :-).

26 thoughts on “In between blizzards”