Last week, we camped once again at the Ice Edge at Amdrup Havn.

Ingkasi shot 2 seals while it was getting dark. A small one, good people-food and a big one, good dog-food! 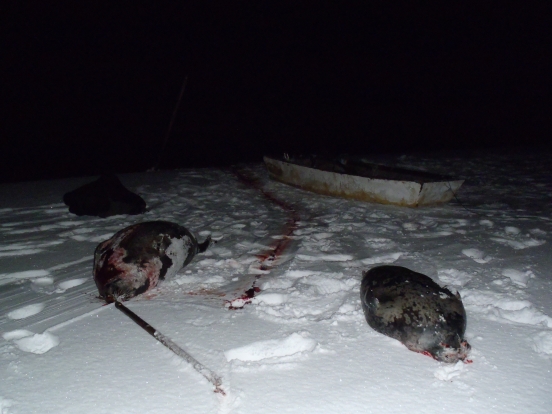 Our dogs were very excited at feeding time, because it had been a while ago since they had tasted fresh seal meat.

I went for a short walk to visit the folks at the boat “Argelvor” that evening, while Ingkasi was staying back at camp. When I finally returned and went to lay down in my sleeping bag, I was unable to fall asleep. I knew there was the possibility of a Polar Bear visit at our campsite. It smelled of fresh seal blood, meat and  blubber, and what kind of Polar Bear could possibly resist the temptation of a free meal?

But of course, who knew if there was a bear in the area??

Polar Bears are protected by Greenlandic Law. A small amount of bears are shot by local full-time hunters every year, according to the Greenlandic Governments quota given to different parts of Greenland. In Ittoqqortoormiit and its surroundings, local hunters are allowed to shoot 35 Polar Bears a year altogether.

So far, in January, 2 bears had been shot close to our community.

The dogs barked at several occasions in the very early morning hours, but we coudn`t spot anything when stepping out of the tent, and they calmed down again. I tried to fall asleep, while Ingkasi made himself a cup of tea and repaired some dog harnesses.

Later, at about 6 am, the dogs suddenly barked furiously. We knew immediately – there was a Polar Bear near by. By the time Ingkasi had gotten out of the tent, he got a glimpse of a dark shadow disappearing into the dark. Now we needed to wait very quietly for the bear to return once more, so Ingkasi could get a chance to shoot it. Using our headlamps or taking pictures was out of the question, since we had to be as invisible as possible.

I believe we waited for almost an hour in the darkness. Ingkasi stayed somewhere in between camp and the Ice Edge, while I waited close to the dogs. Finally, the bear came back. We could not hear it, because it was moving unbelievably quietly. But Ingkasi did spot it and shot it. He called some of his fellow hunters who arrived by boat from Ittoqqortoormiit to help out and to get a part of the meat. 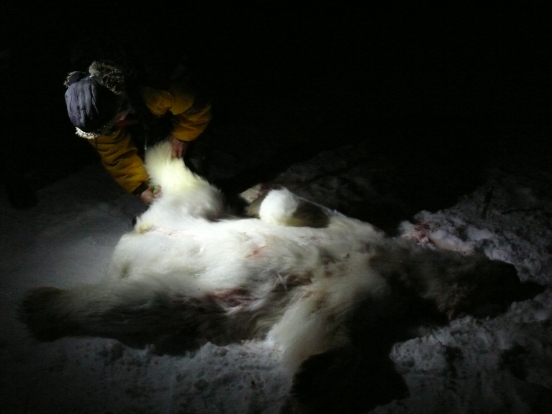 When daylight came, and the slaughtering was done (during which we also were taking a lot of different samples for scientific work in Denmark) we had breakfast inside the tent. Later we did take a good look at the Polar Bear tracks to find out where the bear had come from and how close it had been to camp. It had been approaching camp from different direction, keeping some distance at first. 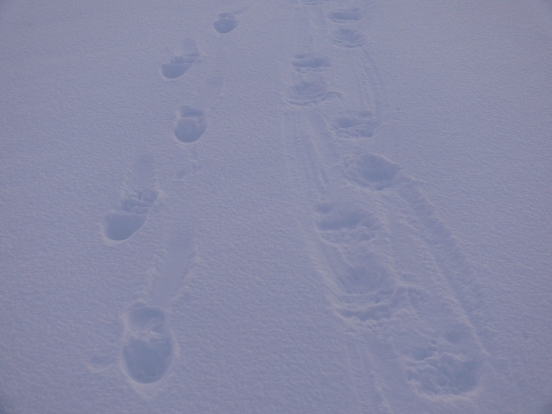 On the next pictures you can see the tracks closest camp, just a few meters away from the dogs. 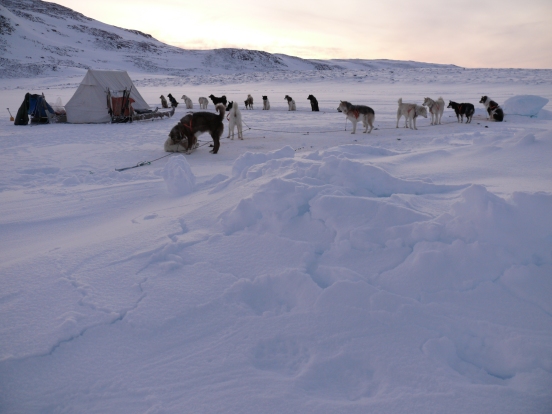 The day of Ingkasis first Polar Bear Hunt this year also was the day we hoped to see the sun again for the first time since November, because the weather finally had cleared up. We could`t see the sun down by the Ice Edge, but I was amazed by the beautiful coloured sky in the bay.

At noon we began to break camp and pack our sledges to go home. And when the dogs were climbing the first hill, we could finally see the sun!! 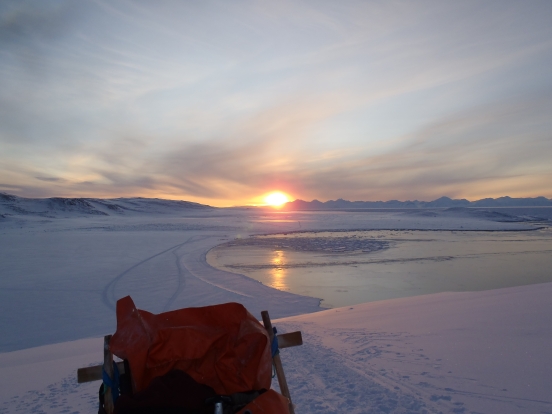 The reflection of the sunlight in the snow and our dog`s fur warmed my heart 🙂 . 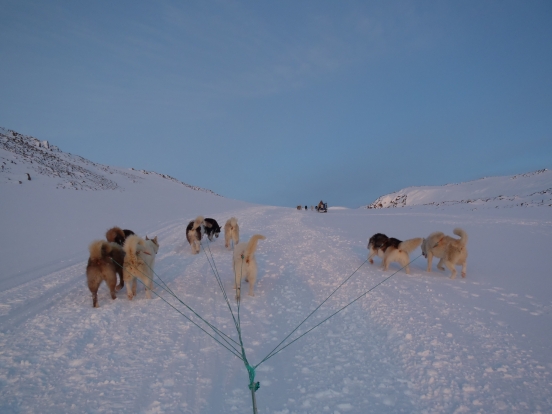 We continued towards Ittoqqortoormiit, watching the beautiful sunset, thankful and happy about the fact that we had meat to eat, share and sell upon our arrival in town! 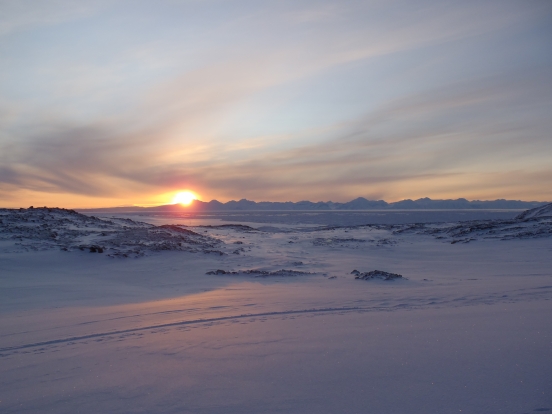 So far, we haven`t seen the sun again!